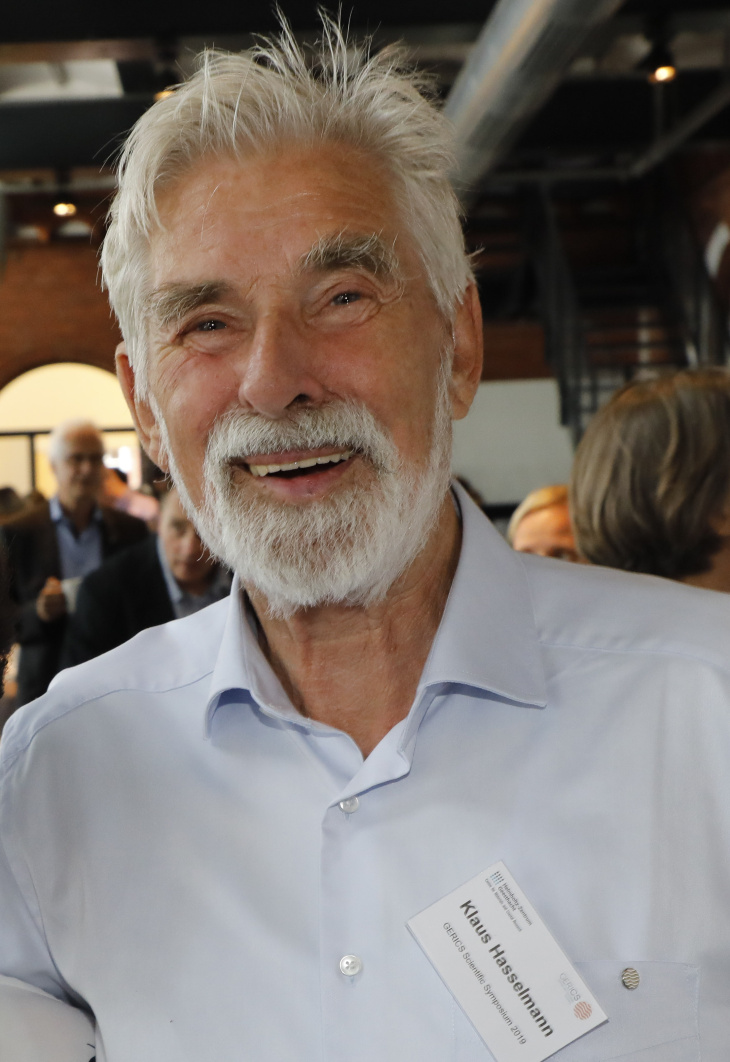 I congratulate you very warmly on this outstanding tribute to your life's work. You have laid one important foundation for climate research with your science, which has now been honored in a magnificent way.

We are proud and happy that many of us had the opportunity to work with you, be it in earlier times at MPI or more recently as a GERICS scientist. I also thank you for the many inspiring discussions on the role of actors in the interaction of climate and society.

Some GERICS scientists would like to express their personal congratulations and appreciation, please see below.

All the best,
Daniela Jacob


Sebastian Bathiany:
When I worked on my PhD thesis, I came across the work of Klaus Hasselmann, the founding father of the institute I was working at (the Max Planck Institute for Meteorology). Klaus Hasselmann immediately became one of my scientific heroes. His work builds a bridge between Einstein's microscopic world of stochastic physics, and the dynamics of our Earth's oceans and atmosphere, with profound implications for the future of mankind. I remember complaining to friends and colleagues several times, that it was unfair that someone like Klaus Hasselmann wouldn't get the Nobel prize. Fortunately, I was wrong.

Irene Fischer-Bruns:
Starting with the discovery of the stochastic nature of the climate system and with his fundamental development of the fingerprint method, Klaus sent out the important message that climate change is man-made, already several decades ago. It is now high time that this wake-up call is finally followed by effective action. It is great that he emphasizes the role of the young generation in the climate movement as very important nowadays.

Elke Keup-Thiel:
I am very pleased that Prof. Klaus Hasselmann has received this outstanding award. He is an incomparable researcher who has laid a foundation for broad research into the influence of humans on climate change at the Max Planck Institute for Meteorology.

Dimitry Kovalevsky:
Congratulations on the Nobel Prize in Physics! We all are very happy to learn that your breakthrough contributions to science are awarded with the most important scientific prize of the world! Thank you for all you have done for science!

Also, many personal thanks for the great opportunity to participate for many years in the research on socioeconomic modelling in the context of climate action lead by you.
We all are celebrating your Nobel Prize Award!

Maria Máñez Costa:
We have today a holistic view of how to model Earth’s climate due to the work of Klaus. He did not stop at the merely physical-laws driven modelling components of the complex system Earth, he contribute as well to the system’s vision of interacting factors affecting the Earth’s climate, including weak policy decision making or power inequities between South and North.

Klaus encourages others to look from a birds’ perspective to the planet, but considering the details that might disentangle the wicked problems of actual society in the face of a changing climate. His integrative views, going beyond linking weather and climate, have been key already in the late 80 for pointing out the no-return situation in which the actual climate change evolution is taking us to. Klaus pointed out clearly which natural impacts or which human activities influence the global climate. This has been important contribution for the political negotiations on emissions reduction.

Adriana Martin:
As a Latin American woman, it is an honor to be at the home of the 2021 Nobel Prize in Physics at this historical moment when we need as humanity the power of diverse knowledge and ideas as a source of inspiration to maintain the hope for a viable future.

Christine Nam:
Heartfelt Congratulations! We are so happy that the significance of your work is being celebrated around the world. The knowledge you brought to the world with your curiosity, creativity, and efforts is the foundation of a whole new generation of climate scientists, particularly here in Hamburg. A true Pearl!

Diana Rechid:
Klaus Hasselmann has laid the foundations for modelling the Earth system, which enables us to project impacts of human action on the future evolution of climate. More than 30 years ago, Klaus Hasselmann projected what we see today. What an incredible opportunity for humanity! To make use of it, to act now for a future worth living!

Kevin Sieck:
Well deserved honor for a brilliant scientist, who is always open for discussion no matter if you are a master student or a Nobel prize winner.

Claas Teichmann:
It is great that Klaus Hasselmann has won the Nobel Prize in Physics!
I am very happy for him, but also for the world-wide community of climate researchers about this award.