From 19. - 21. February 2018 GERICS staff members Lola Kotova, Gaby Langendijk and Jörg Cortekar participated in the kick-off meeting of the twin-projects Klimapolis and São Paulo City Lab in São José dos Campos, Brazil. Both projects are centered around the topics of regional climate change and air pollution and the establishment of long lasting networks between Brazilian and German partners in these fields. The projects are led by Guy Brasseur, MPI-M (Klimapolis) and Ali Hoshyaripour, KIT (São Paulo City Lab).

KLIMAPOLIS project aims in particular to establish and develop a long-term cooperative research and service structure composed of prominent research and service institutions in Germany and Brazil, that will address the questions of co-evolution of urbanization, climate change and air pollution in several metropolitans areas of Brazil. The objective is to co-design with city officials and assess win-win solutions that will lead to the development of smart cities, resilient to climate change and air pollution. This will be achieved by integrating complimentary expertise through staff exchange between Brazil and Germany, training courses and joint workshops. The Brazilian-German network will serve as the focal point for development of joint proposals for sustained national funding from Germany and Brazil as well as from the European Commission and other multilateral source. 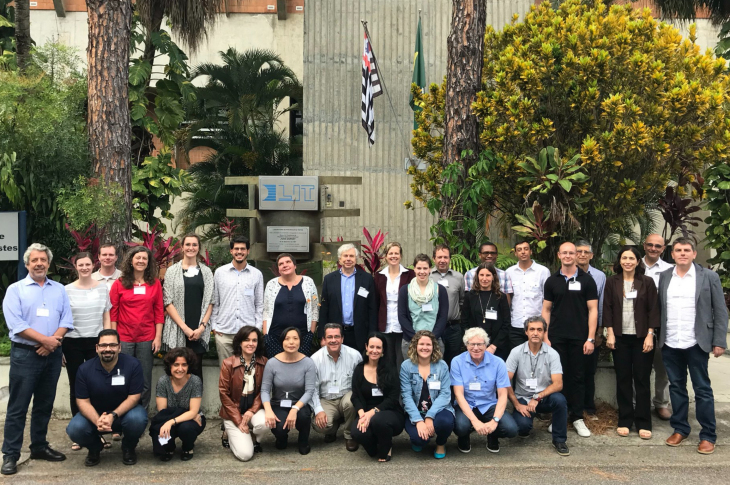 The kick-off aimed at getting to know each other and to further detail the work plan for the tasks to be done. German partners are from Max-Planck-Institut für Meteorologie (MPI-M), Center for Global Governance, Universität Hamburg (UHH), GERICS and Rheinisches Institut für Umweltforschung (RIU) an der Universität zu Köln e. V.

They bring a unique combination of expertise in global and regional climate modeling (MPI-M and GERICS), air quality analysis and prediction (RIU and MPI-M), impact assessment and governance (UHH and GERICS) that will increase the visibility of the German scientific excellence in Latin America and, in particular, in Brazil.

Institutions in Brazil are covering the aspects of climate and air quality modeling (USP, INPE), urbanization and governance (USP), vulnerabilities due to weather extremes (INPE, FUNCEME) and some local universities representatives of the urban areas (UFRN, UTFPr, UFMG).